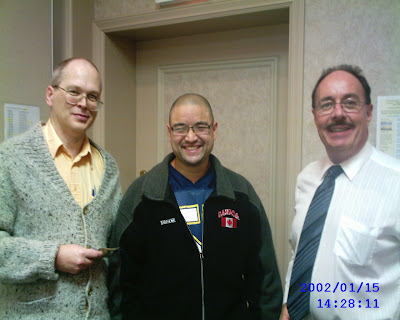 This is the second time in this tournament for me. The first time was back in 2001 when Pascal Charbonneau won the event. I was initially paired with Pascal, but the pairings were changed, and I lost the chance to play a Canadian GM.

This time around the TD was Mark Dutton and the organizer was Roger Patterson. Some of the photos I took can be seen on the website of the Victoria Chess Club. The crosstable and photos are over here.

My results were only satisfactory at best. I settled for a draw in the fourth round against a lower rated player, which gave me an easier pairing in the fifth round, and I also blundered in the two games I lost. Mind you, it's been a year since I played in a rated event so I shouldn't beat myself up too much. There is work to be done, however. I hope I can be ready for the big event in Victoria in April.

The Victoria club doesn't make a habit of publishing all the games, so if I want my games published I will have to do it myself.

More details about the event: the tournament was held at one of the Traveller's Inns on Douglas Street in Victoria. The location was great with one notable problem ... the "salon" we were in was right next to another salon in which a large meeting was taking place. The meeting and the goings-on could be clearly heard from next door. So, were were treated to the singing of God Save the Queen and O Canada by the United Empire Loyalist Association. In between the singing we heard the proceedings of their meeting. Not that they did a bad job, but it WAS a distraction.

Instead of playing 15. Be1, Stewart could have played 15. Qf3 and got himself a slight edge. In any case, 16 ... Ne4 was an awful move since I had 16 ...Qd4 to keep the extra pawn and the pressure on White. Having dropped the knight for a couple of pawns, I didn't feel so bad settling for a draw by repetition. Stewart and I had a nice, leisurely lunch prior to playing our 5th round games.

Here is a permanent link to the above game. I've struggled with a few game viewers, unlike this one, that allow annotations and variations. I will probably struggle some more until the problem is solved.
Posted by Nigel Hanrahan at 10:51 AM

Nice blog Nigel. Look forward to seeing more.
By the way, don't despair about not being paired with Pascal in 2001; he wasn't a GM then.

Nigel,
After exploring some other alternatives to putting a variation playable chess diagram in a blogger blog - I decided on a simpler solution.

If you have somewhere to host some html files, one can generate some html/js with Chessbase Light, CA, or Rybka and host it there.

Then use an iframe to display it in blogger.

Easy and quick and you have total control.

Please take a look at my first try at chessmanitoba.blogspot.com

Hi there, nice blog!
I also had some struggles with chess viewer/blogger, so I ended up having palview generate 2 pages - one with diagrams only for the actual post body, and then another page with replayable games that I host on my other webserver, and which I link to. Here are some more details: http://roman-chess.blogspot.com/2008/07/added-replay-game-link-using-powershell.html